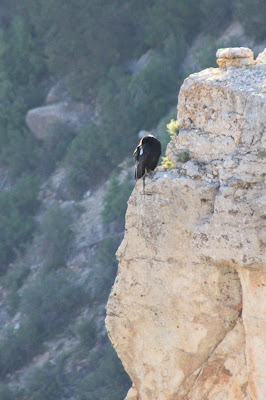 I'm a cruel mother. I actually woke my son up at 5:00 am so we could go out into the 35 degree weather to watch this condor sleep at the edge of a cliff at the Grand Canyon with the hopes that eventually we would see it take off. A man had alerted us to the condor the night before and I wanted to see if it was still there the next morning and watch it fly. We knew it was a condor mainly because of the number tag on its wing. All the adult condors that have been re-introduced to the wild wear these tags along with a radio transmitter.

The story of the California Condor's brush with extinction (down to 22 birds in the wild in 1982) and the truly heroic efforts by biologists and conservationists to capture these birds, and then not only return them to the wild but to encourage them to breed in the wild again is amazing. Sophie Osborn, a former Field Manager for the Arizona Restoration Project, has written a wonderfully inspiring book on the subject, Condors in Canyon Country, which focuses on the birds in Arizona. I hadn't known that the Grand Canyon was a release sight (actually it's the Vermilion Cliffs to the north of the Canyon) and was excited to hear that the condors were flying free over the Canyon again. I had never expected to see one of these rare birds in my lifetime but by the end of our trip, we had observed five of them, including two young birds.

Condors live a slow, relaxed life. They take 6 months to fledge and 5 to 6 years to become adults. Like ravens, they are very intelligent birds and have a lively curiosity. They can see 6 to 8 times better than humans and can magnify things in the center of their vision. But unlike most other birds and because of their slow maturation, the young birds must learn condor ways from their parents. Foraging, etc. is not totally instinctive. This was the problem facing the scientists who wanted to return the birds to the wild. If there were no more birds in the wild who remembered, who would teach the young birds bred in captivity?

This bird, No. 241 (only the 41 is shown on the tag), is a good example. She was hatched on April 13, 2001 at the World Center for Birds of Prey sponsored by the Peregrine Fund, and she was released at the Vermilion Cliffs on May 9, 2002. When she was first released, she was prone to roosting in unsafe locations, not high on a cliff as she is here but down on the talus slope where she was exposed to coyotes during the night. Ms. Osborn and her crew tried to coax the bird to a better location, but she wouldn't move, so volunteers spent the night with her (at a safe distance) to protect her from potential predators. Others were up at the top of the cliffs to keep in radio contact with the volunteers. After a few days, 241 learned to sleep in a safer spot.

While my son and I watched her, we caught the sunrise and saw several other species of birds including Western Bluebirds, a Three-Toed Woodpecker, and a nest of Blue-Gray Gnatcatchers that was very close to the wall at the edge of the cliff. At one point, 241 opened her eyes, looked around and stretched out her enormous wings (wing span is about 9 feet!), and then tucked her head back under a wing and went back to sleep. Later, she again woke up, stretched and decided to catch the sun's rays on her wings to warm them. We thought for sure she would fly now. But no, she sunned the front and then the back of her wings and moved up to a higher perch for more sunning, but did not take off. Still too cold? Condors like other raptors fly on warm thermals coming from the canyon bottom. Condors are known for being able to soar for long periods of time without flapping their wings.

As we danced around trying to keep warm, my son took this photo through my spotting scope. Soon I was so cold, I couldn't hold my binoculars steady and we decided to give up and go in for a hot shower and breakfast. When we came back, she was gone. 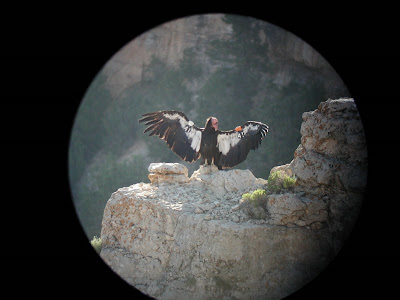