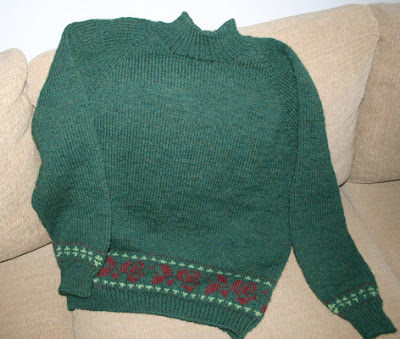 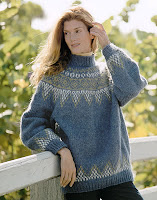 I finished my daughter's sweater this weekend. (Yay!) She wanted just a plain pull-over sweater to wear with jeans so I started with a raglan-sleeve design that knitted from the top down in Forest Green Heather Wool Ease. It was pretty easy-going until I decided to get fancy and add some color along the bottom edge. The two-color stranded knitting design I chose was from The Best of Lopi. At first I wanted 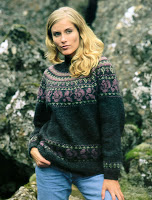 to do Brigitte, but although the bottom border looks simple there are several rows that have three colors in them. I did a swatch and figured out a way to get the three colors using a combination of intarsia and stranded knitting but was not happy with the results. It was a lot of work for something that barely showed, at least in the colors I was using. I switched to the lovely rose border on the Laela sweater.

I got out some graph paper and using my colored pencils made a new chart that was larger and easier for me to read and also gave me an idea of what the colors might look like. It was also a chart that I could mark up without messing up my book. After buying more that half a dozen different yarns and making several swatches, I chose a deep red for the roses and a light green for the contrasting design. The light green was a sock yarn so I used it double throughout.

It was kind of fun to knit with the main color in my left hand and the second color in my right. Since I was knitting in the round, I never had to purl which would have been more difficult for me. And lucky me, the two patterns matched exactly as far as number of stitches goes and there were no decreases to worry about in the body of the sweater, only in the sleeves. However, since I was knitting from the top down and Laela goes from the bottom up, I wasn't sure how to read the graph. I decided to read it the normal way from right to left so my roses swim in the opposite direction of Laela's!

Parts of the rose pattern called for 6 or 7 stitches in a row of one color, so after three stitches I crossed the yarns over so there wouldn't be a long loop in the back. I tried to knit very loosely so that the sweater wouldn't pucker, but I found that the looser I made my strands, the looser the stitches were, too, and it was sort of self-defeating. I used the trick of spreading the stitches out on the right needle to make the strand loose. I also discovered that my right hand stitches were inherently tighter than my left.

I had read about the "color jog" that occurs when you knit with two colors in the round. This is the point where one row ends and a new row begins which creates a jog in the pattern. After thinking about it and wondering how I could apply the suggested techniques for minimizing it, I really didn't do much except to use more of the background color at that point. Actually, in the rose itself it is not apparent at all. I had to really hunt to find it to take this picture so I decided that my daughter probably wouldn't see it either. Don't tell her it is there!
Posted by Grandma Ann at 8:48 AM