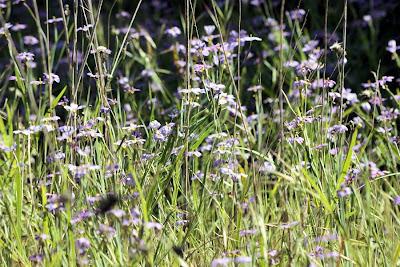 Blue-eyed Grass, Sisyrinchium bellum
Since I have been babysitting for Master C. quite a bit the last few weeks, it has given me plenty of opportunity to go down to the Oak Canyon Nature Center and see the spring blooms. The scene has been changing almost daily from the wet, lush, green vegetation of late February and the beginnings of the appearance of wildflowers, to the profusion of blossoms in March, to the sudden hot dry conditions we are having now which dries out the tender spring plants but brings on the summer flowers exemplified by the Cobweb Thistle at the bottom of this post. I have found and identified many new plants for myself which has been a lot of fun. A new book recommended by Yvetta called, Flora of the Santa Ana River and Environs by Oscar F. Clarke, has been very helpful (order it from Canada while the supply lasts), but as always, there is plenty of room for argument on some of the identifications.

Since I have been commenting about the difference between Sugar Bush and Lemonadeberry (Rhus ovata and Rhus integrifolia), here is a photo of a beautiful branch of Sugar Bush blooms. 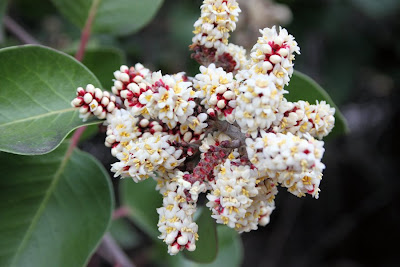 One of the identifications I have really had trouble with is this phacelia below. In March, I found one lone plant and now there are hundreds along the trail called Road Runner Ridge. They have posted a sign at the beginning of the trail showing photos of the wildflowers in bloom along the trail and they identify this phacelia as Sticky Phacelia, Phacelia viscida. But after much research on the web and in my books, I am sticking with my identification of Parry's Phacelia, Phacelia parryi. The color (rich, deep purple), the five white spots in the center and lack of a well-defined white area, and the fact that the leaves and stems are not "sticky" (the leaves felt more like velvet to me) are my reasons for making this identification. BTW, touching this plant may cause dermatitis, which I didn't know at the time, but I suffered no ill effects. 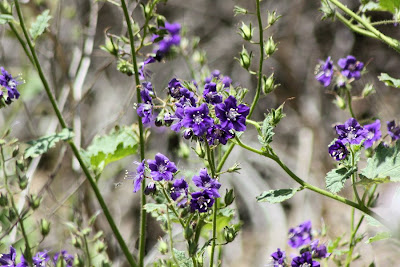 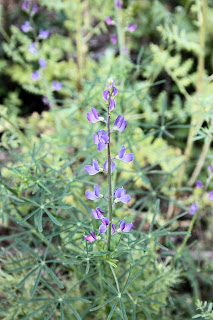 I found two more lupines (yay!), one of them so tiny I almost missed it, Miniature Lupine or Lupinus bicolor. The other one, by contrast, is quite large and covered with lots of hairs giving it the name Nettle Lupine, Lupinus hirsutissimus. Hirsutissimus was growing right on the side of the path amidst all the weeds, so it got whacked with a weed-whacker when they widened the path, poor thing. Since I took close-up photos of both these lupines, you really can't appreciate the difference in size, but you can see the narrow leaves of the miniature lupine and the wide, flat leaves of the nettle and its hairy stem. 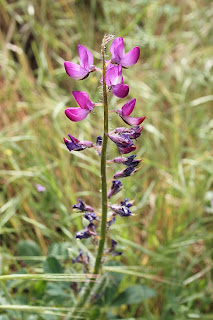 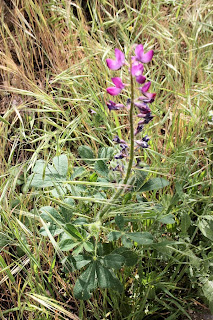 
Below are some of the other plants that were either new to me or that I found very interesting. Deer Weed is the favorite plant of the Palos Verdes Blue Butterfly. Its flowers turn orange with age. I love the dark red flowers of the California Figwort. It's a very striking plant. The photo of Caterpillar Phacelia shows how it got its name. There is a yellow pincushion flower besides this white one (Chaenactis artemisiaefolia) and both are represented at OCNC although the white one is more abundant. I didn't know that California had its own Wild Morning Glory. There is a similar, non-native morning glory called bindweed that is an annoying pest, so I find calling the native plant a "false bindweed" rather humorous. You can tell them apart by the position of the bracts at the base of the flower which look like tiny leaves. In the native plant, the bracts are right under the flower, in the bindweed they are further down the stem. And finally is the Cobweb Thistle, Circium occidentale, which gets its name from the cottony hairs that cover the plant. 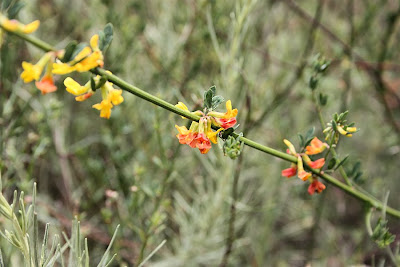 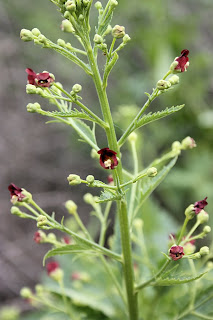 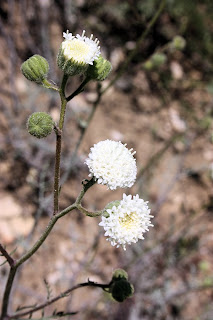 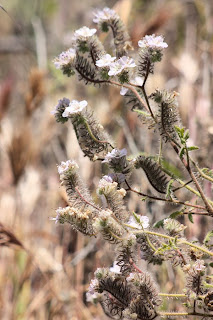 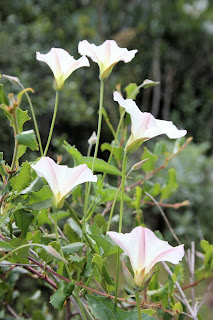 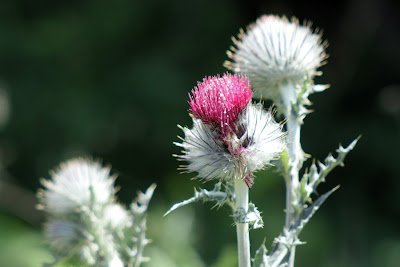 Cobweb Thistle, Cirsium occidentale
Posted by Grandma Ann at 9:12 AM