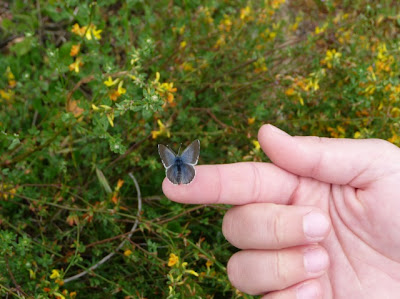 If you are a local butterfly lover, you may have already read about the recent release of captive-bred Palos Verdes Blue Butterflies, an endangered species. Yvetta was there to watch the release and sent me these fabulous photos which she said I could share with you. There had been an estimated 220 of these butterflies left in the wild two years ago, but thanks to Jana Johnson and her students, a successful breeding program has been conducted at a laboratory housed at Moorpark College, a community college in Simi Valley. (Another HOORAY! for our community colleges!) 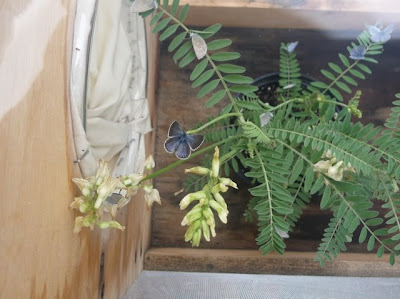 This photo shows the type of boxes that the butterflies were hatched in, and the photo below shows Jana with her students. Each one is holding a bag containing butterflies, 8 males and 2 females. A total of 80 butterflies were released at this site, a vacant Navy property along north Gaffey Street. Other sites include Chandler Preserve, and future sites include White Point Nature Preserve, and Friendship Park. The more sites that they release the butterflies at, the better the chances that the species will survive. 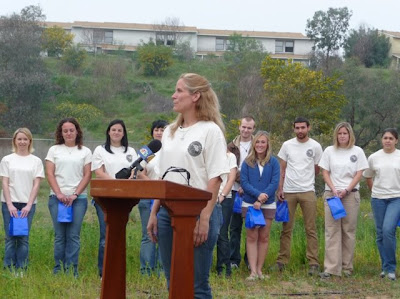 The top photo is a female butterfly, and this photo below shows a male. Their favorite food is deerweed, but in captivity they were fed honey gathered at the Defense Fuel Supply Point property in San Pedro. 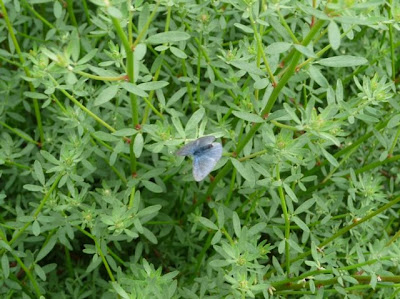 "They're worth saving," said Yvetta Williams of Rancho Palos Verdes, a docent for the Palos Verdes Peninsula Land Conservancy who has followed the blue butterfly saga through the years. "This is just fantastic."

Yes, it is. Thanks, Yvetta!