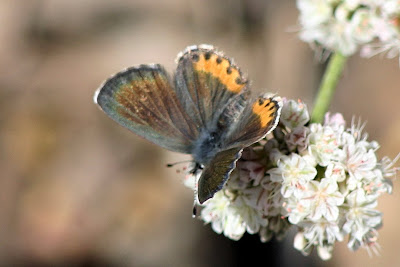 Last Wednesday's LA Times (June 25th) had a front page article on a study that was done to determine the effects of global warming on our state's native plants. (You need a subscription to read the full article, but you can read the study from which it is derived here.) The news was not good.

Two-thirds of California's unique plants, some 2,300 species that grow nowhere else in the world, could be wiped out across much of their current geographic ranges by the end of the century because of rising temperatures and changing rainfall patterns, according to a new study.

What bothered me more than the article, were the comments that came in to the Times and were listed at the bottom of the online version. There were several people that said in effect, "so what?" and it's "survival of the fittest," and all that. They don't seem to realize that with native plants, you get native wildlife, too, native birds, bugs, mammals, etc. If the plants or in some cases the one plant that a particular species of animal likes to feed on disappears, we lose another species. 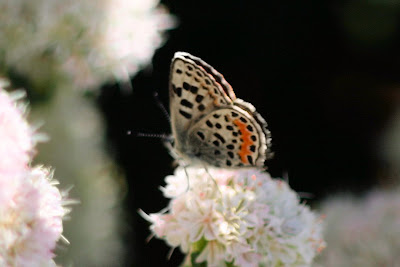 Let's take for example the El Segundo Blue Butterfly, Euphilotes battoides allyni. It lives out its entire life-cycle on the California native plant, Coast Buckwheat, Eriogonum parviflorum. This butterfly is on the endangered species list but is making a comeback due to conservation efforts. Traditionally, it was found in the dunes at El Segundo, and along Santa Monica Bay south to Malaga Cove on Palos Verdes Peninsula. Conservation efforts have centered on removing the non-native vegetation growing on the cliffs and dunes (mostly what we call ice plant) and replacing it with native plants, and in particular, the Coast Buckwheat. Here is a YouTube link with Travis Longcore, PhD., from USC explaining the project. You might also like to read his 5-year Review: Summary and Evaluation which was just released in March of this year. 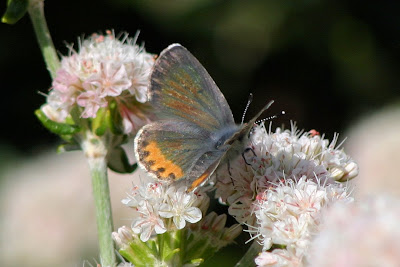 I was alerted to the fact that the butterfly had been seen at Pt. Vicente by the friend that I met there last February. I was very eager to go down to have a look for myself and take photos of course, when my camera died as I reported yesterday. Luckily, in searching the web for a solution to the camera problem, I discovered that I could still use it in manual focus mode. It was the auto-focus feature that was broken. So after flipping the sub-mirror up manually and checking that the camera would work, I packed my gear and headed out early this morning. 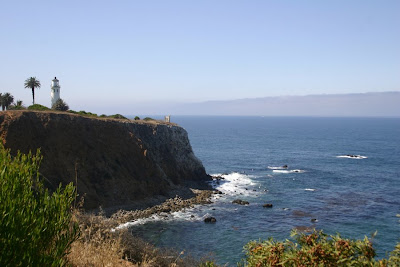 It was a lovely morning, but the fog horn was blowing at the lighthouse. You can see the fog out there hugging Santa Catalina Island, ready and waiting to envelop us once again. I had no trouble finding the buckwheat because the native plant garden that has been established around the Point Vicente Interpretive Center (PVIC), had several plants in full bloom. But I was amazed when I finally found the butterfly because it is so tiny! It is no bigger than the bees that were also buzzing around the flowers. 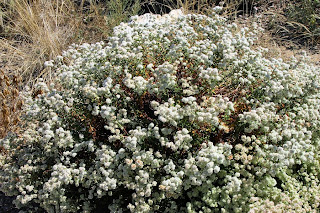 My photos above might be deceiving so to give you some idea of the size of the butterfly, here is a photo of the full plant. The balls of flowers on the ends of the stalks can't be much more than an inch in diameter.

The males are supposed to be bluer than the females, but I am not sure I could tell them apart. When they flew they looked more blue than when they landed. The photo below shows a possible male coming to chase after the female who is feeding. A bee is getting his fill nearby. The adults live only a few days. They mate and lay eggs right on the flowers and the eggs hatch in 3 to 5 days. During the "caterpillar" stage, the larvae hide in the flower heads and feed on the buckwheat seeds. Then they molt into their pupal stage. The "cocoons" fall to the ground and remain buried in loose sand or debris beneath the plant for one or more years when the whole cycle begins again. 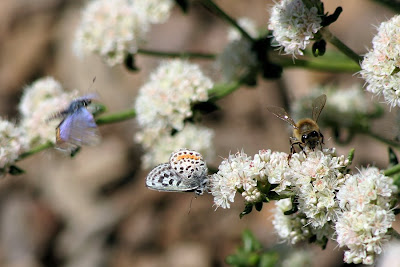 So does it matter if these tiny butterflies survive? If their host plant disappears? Most of the people walking by the garden probably had no clue that they were even there they are so small. But after sitting and watching them for almost two hours, seeing them flit about in true butterfly style, landing to feed and maybe soak up some sun, then chasing each other off, I think it does.
Posted by Grandma Ann at 2:22 PM