The Canyon in the Fall 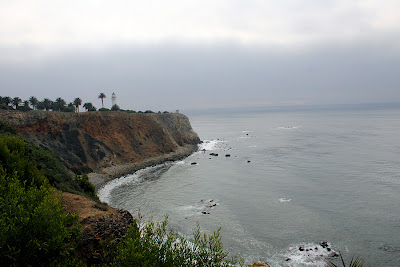 We had our walk through Lunada Canyon for the Palos Verdes Land Conservancy yesterday morning. It was a cool and slightly foggy morning which was nice actually, because we were able to go down the canyon further than we ever had before. Usually, we turn back at a certain point because of the heat. In the summer, it's wide open sun with no shade in the canyon.

The canyon was very dry as was expected, but it was amazing to see some of the plants in bloom and even sending out new shoots. There is no irrigation in the canyon except for a trickle of runoff that runs down the middle, so these plants have only had those scant inches of rain that fell in late September, early October. The California Fuschia (Epilobium canum) on the left was spectacular and the Lemonadeberry (Rhus integrifolia) on the right was putting out new growth everywhere. 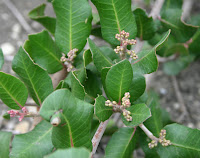 A few of the plants were looking very sad and dry and dead or dormant, especially the lupine (Lupinus longifolius) which will have to reseed itself if it is to come back. The Bladderpod (Isomeris arborea) was also looking pretty bad, but it will come back as soon as it gets some water. All the sages have gone to seed as has the Coyote Bush (Baccharis pilularis) which was absolutely covered with fuzzy white seed pods ready and waiting to be dispersed by the wind. 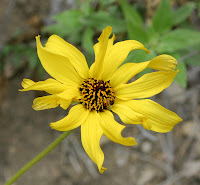 Other plants like this California Bush Sunflower (Encelia californica) were in an in-between stage—very dry but both flowering and seeding. California Buckwheat (Erigonum fasciculatum) and Coast Goldenbush (Isocoma menziesii) fell in this category also. Another amazing plant was the Cliff Aster (Malocathrix saxatilis) which has sprung up profusely along the wide swath along the left side of the canyon that was cleared due to fire regulations. The aster, with its small daisy-like flowers, thrives in disturbed areas and there were new plants everywhere. How do they do that with no water?

After finishing our walk, I headed over to Pt. Vicente where there is a lighthouse and an Interpretive Center and the reason for my visit, a well-tended native plant garden. I wanted to have a look at their sages because I was still not sure I had identified the black and purple sages correctly in the canyon. As luck would have it, when I arrived there was a group of volunteers from the California Native Plant Society busy at work weeding and pruning in the garden. Here was my chance to get information from the experts and they happily obliged. Two women in particular spent a lot of time talking to me, looking at the photos I had with me, and explaining things about the plants of the canyon and Palos Verdes in general. I had indeed mixed up the black and purple sages and will set that right for our next walk through the canyon.