Nefarious deeds have been happening in my backyard lately. The other day I went out to throw some kitchen scraps on the compost pile when I discovered two baby opossum... heads!... lying on the path. (No pictures were taken.) Bits of fur were lying about, too, but the bodies were gone. At first I blamed the neighborhood cats, of which there are several. But this didn't really look like a cat's doings. They usually don't eat their prey, they just play with it. And they wouldn't leave just the heads. They are more likely to bury their dead prey or bring it home to their astonished owners. Our cat used to do that. He would bury dead lizards under the living room carpet!

Later that same evening I spied an adult opossum slinking across the walls that separate my neighbors' yards from mine. Small animals including squirrels, an occasional opossum or raccoon, and the cats use these walls as freeways. At the same time the opossum was moving about, crows were squawking like mad in the pine tree. Did crows eat the babies?

Next day I discovered a more plausible answer to the mystery. A hawk was flying over being harassed by one crow, which they are apt to do. I am not sure of the kind of hawk, I was driving and couldn't get a good look at it. It could have been a Cooper's Hawk, or more likely a Red-tailed Hawk. A Red-tailed Hawk could have eaten the babies and left the heads. I feel sorry for the parents, but I guess that is Nature's way. 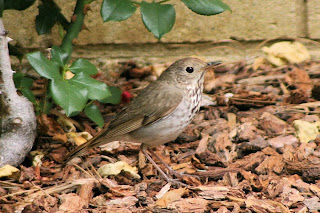 The same evening, I spotted a Hermit Thrush under the rose bushes. I haven't seen one of these in a long time. As their name implies, they lurk in the undergrowth and you have to be lucky to see one, never mind get a picture of one. I grabbed my camera which happened to be out on the table and got some great shots of the bird before he disappeared in the bushes.

Later, I remembered why the camera was out on the table. I was in the process of downloading photos when my cordless mouse's batteries announced that they needed to be re-charged. (Computers can be so frustrating!) So while the batteries re-charged, the CompactFlash card sat on the desk and there was no card in the camera. My "great shots" did not get saved! 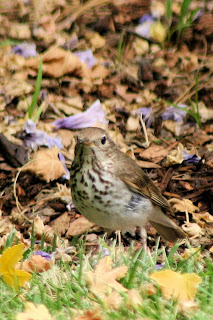 I was terribly disappointed, but bless his heart, the little guy came back yesterday. Not only did he come back, he practically posed for me. You can tell from these photos that he was very aware of me pointing this big black thing at him even though I was inside the house. He slowly and carefully hopped from the Lavatera, behind the rose bushes which line the back wall, to the Rapheolepis on the other side, stopping every few seconds to have a look at me to see what I was doing. He then did the same thing in reverse all the way back to the Lavatera and then disappeared. He was extremely quiet. What I love most about these birds, the Hermit Thrush, Wood Thrush, etc., is their beautiful, haunting song. It sounds like Pan Pipes. I remember hiking through a woods in New Hampshire and hearing not a sound except for a Wood Thrush far off somewhere, beckoning with his song.