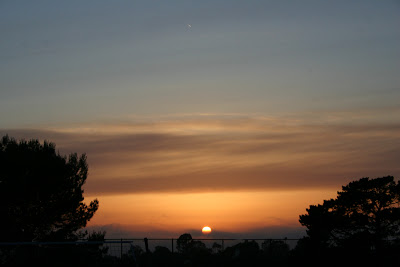 I finally had a chance to go out and do some star-gazing with the guys Saturday night. March and April were such busy months, what with traveling and being sick and then taking care of my grandson because he and my daughter were sick, not to mention several concerts to play, that I haven't had time to blog much or do some of the routine things that I like to do. But Saturday was the night of the new moon, and the club was offering an extra in-town observing session, so I packed my scope and drove up to Ridgecrest.

Above is a photo of the sunset that night which shows that a low-cloud cover was threatening to ruin our evening. Straight up the sky was clear and that's how things were for most of the time. Fortunately, a lot of good things were to be seen looking straight up. Once, a bank of fog built up below us and briefly the sky was very dark in the west. Then a wind came along and blew the fog over us. After about 10 minutes, the sky cleared again. When this happened a second time at about 11:20 p.m., we decided to pack it in.

I was hoping to see Mercury after the sun set. It is always close to the sun from our perspective, so you have to catch it just after sunset and now is a good time to do that. I thought I had it in my scope at about 8:40, but after reviewing things at home with Starry Night Pro, I realized that I had been looking at nearby Aldebaran. I'll have to try again this week if the fog will lift. It has gotten even thicker. You don't need to have a scope for this one, you can see Mercury with binoculars. All you need is a clear view of the horizon at sunset. Mercury will be fairly bright right now. It will get dimmer as the month goes on. 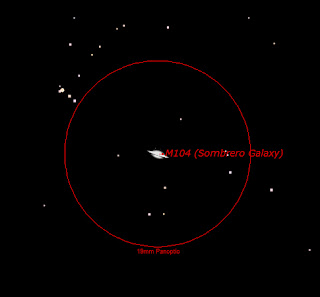 Some of the best things to see at this time of year are galaxies. M104, the Sombrero Galaxy, was one of the two new objects that I observed. I was actually looking at this galaxy to try to see an asteroid called Iris that is moving close by. One of the guys (Ken) has a 12-inch scope that brought the galaxy in fairly clearly. We did see the galaxy, but whether or not we saw the asteroid, I can't determine. I think you would have to view the same part of the sky two or three nights in a row to see what has moved. At the left is a screen capture from Starry Night that shows the configuration as I saw it in my own scope. It's obvious how the galaxy got its name! However, I have to point out that it was not nearly this well-defined in our scopes. It was more like a hazy blur, but you could definitely see the sombrero shape. The red circle indicates the field of view I had with my 19mm Panoptic lens. The asteroid is not shown in this picture. It would have been passing to the right of the galaxy. 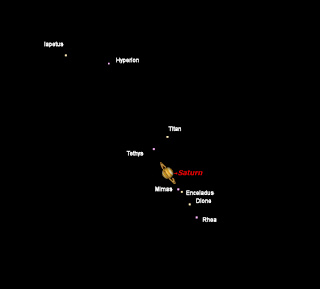 Saturn was spectacular Saturday night. Ken and I looked at it several times during the course of the evening. Not only the rings, but also the Cassini Division was easily discernible. At first we could only see 4 moons, but later, when it was darker we could make out a 5th moon. The moons we could see were (from bottom to top) Rhea, Dione, Enceladus, Tethys, and Titan. Mimas was too faint and too close to Enceladus and we didn't think anything further out was a moon. We probably could have seen Iapetus as well if we had tried. The picture shows the configuration of the moons as we saw it in Ken's scope.

Oh yes, the second new object for me was M35, an open cluster in Gemini.