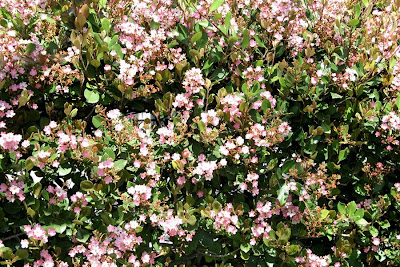 The March 7th issue of Science Magazine, which I am only now getting around to browsing through, mentions an organization that gives everyone a chance to be a scientist and help with tracking climate change. The project, called BudBurst, started in 2007 and has already collected data from 26 states which will be analyzed by university and government researchers. Basically, what you do is report the timing of the appearance of leaves, flowers, and fruits in your own backyard and neighborhood. It helps to sign up and get started before things start blooming because they want to know the date that the first bloom appears. They also want to know when things are in full bloom, and when the last flower dies. 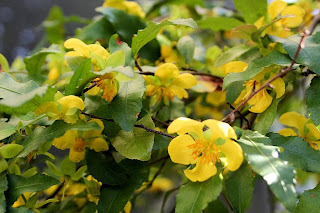 In Southern California, that can be tricky. Some plants bloom all year, and especially this year, there has been no rest for a lot of them. Other times, things start blooming before I have had a chance to check them out and I am pleasantly surprised. That happened this year with my Mickey Mouse plant, or Ochna serrulata. It's over on the side of the house and was planted by the birds. I hardly ever water it, only once a month in summer. (Someone told me that just means that its roots extend into my neighbor's yard and it is getting water there.) Anyway I was surprised recently to find it in full bloom. The sepals of these blooms will later turn red with black seed pods in the center making it look like Mickey hanging upside down. 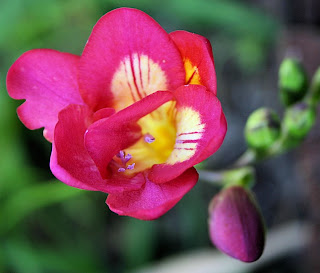 Bulbs that sent up their green shoots in early fall are just now blooming like these red Freesias and the Ixia below. I have yellow, white, and one or two of the red kind of Freesia planted around the "estate." Someone asked which ones smell the best and I have to say they all smell good and just slightly different from each other. I like to cut them and bring them into the house to adorn my table. Then I can enjoy the aroma while I eat. Plus the yellow and white blossoms together make a dazzling arrangement. 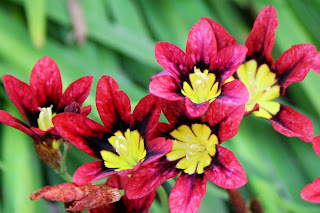 My friend Kathy says Ixia reminds her of colored Easter eggs. These bulbs were given to me by a music friend. One way for a plant to get itself propagated by humans is to have irresistible flowers or aromas. 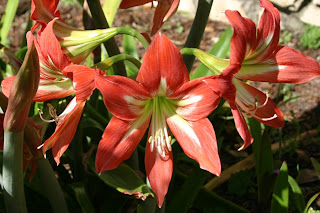 Amaryllis has greens all year. This clump was started by seeds from a nearby bed of flowers and blown by the wind. These plants have been in bloom for months while the original plants are just starting to send up their fat flower stalks. They do get more sun. I received my first amaryllis bulbs from the woman who took care of my son while I was giving birth to my daughter. My daughter was born in March and the amaryllis has bloomed every year in March reminding me of that happy occasion. I used to dig the bulbs up every January, divide them, and distribute the extras to my neighbors, but lately, I haven't done that and they don't seem to mind. The bulbs, that is. 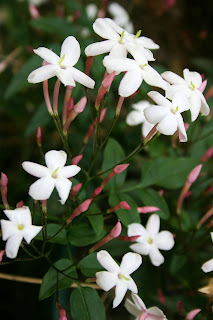 This Jasimine has produced profuse flowers this year. It started out as a plant in a pot hanging from my patio cover. After a few years, it started looking very sad, so I took it down and deposited it over by a wall where it gets much more shade. It obviously likes the change, plus all the rain water it got this year. I might mention that this species has a delicate fragrance. It is not overpowering like the night-blooming kind. When it is warm enough to open the patio door, the gentle scent fills my kitchen.

But Project BudBurst is more interested in native plants naturally and none of these plants are natives of my area. Most of them were planted before I became a native plant enthusiast and since they have adapted so well to my infrequent waterings, I have left them. New plants, whether drought-tolerant or not, require water to get established.