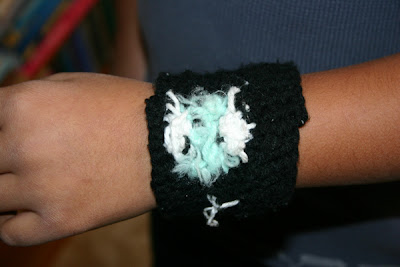 My grandson Nick (now 11) has been crocheting again. He says this is an Omnitrix which gives its wearer super powers or something. He got the idea from the Ben 10 TV show. Now don't quote me on any of this because I know nothing about the current kids' TV shows or TV shows in general for that matter. My TV gets used only for Masterpiece Theater and playing DVDs.
I was impressed with Nick's creativity and the fact that he remembered what I taught him last Christmas. I'll have to come up with some new projects for us to do when I visit him this Holiday season.
Posted by Grandma Ann at 9:17 AM