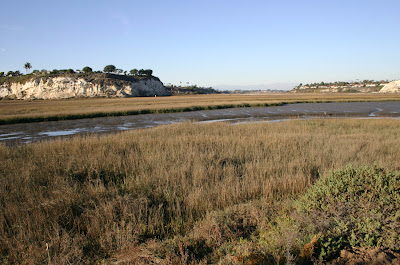 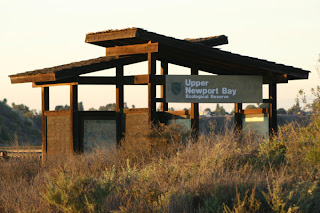 Yesterday was such a beautiful day, clear blue skies for the first time in weeks, that I decided to go down to Upper Newport Bay to see the birds. I hadn't been down there in several years but it is one of Southern California's hot spots for birds. It is a huge area that takes several hours to view and I misjudged the time a bit and got there only a few hours before sunset, which is why the sky isn't blue in the photo on the left.
Normally, the evening is the best time to see shorebirds at a salt-water marsh like this because they are busy feeding before settling down for the night, or taking off in flight to their next destination. The dabbling ducks, like the teals and wigeons which are in abundance at Newport Bay, migrate at night if they are moving on from the bay. However, some do stay at the bay all winter. The shorebirds, dowitchers, godwits, etc., who began their migration last July or August have pretty much arrived at their wintering feeding grounds by November. They are here to stay until spring. 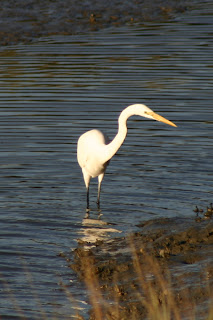 The tide was out when I arrived and it seemed to be a very low tide. There was hardly any water to be seen, the bay was all mud. That combined with the very dry brush surrounding the bay made for a very bleak landscape. It also forced the birds to gather down in the gullies made by the moving water so that there were fewer birds to see from the road that winds its way along the south side of the marsh. The birds are also farther away from the viewing sites so picture taking is more difficult. I had to use my spotting scope to see the birds well and wished I had a camera lens that is as good as the Leica scope! I was lucky to get this photo of a female Northern Harrier as she swooped low over the grasses looking for prey by taking three shots in a row very quickly. Harriers are beautiful birds when you get to see them up close. 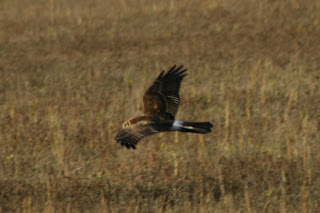 I was very happy to see a few Northern Pintails. These have always been at Newport Bay in the winter but lately, they have been classified by the Audubon Society as a bird that was once common that is not so common anymore (see Common Birds in Decline). Their numbers are down by a whopping 77%!

Here is a list of all the birds that I saw. There were 28 species in all. They are in no particular order. I can't tell a greater from a lesser Yellowlegs unless they are side-by-side. (I think this one was a lesser.) And I can't tell a long-billed from a short-billed Dowitcher even if they are side-by-side, but then neither can most birders. So we call them just Dowitchers.