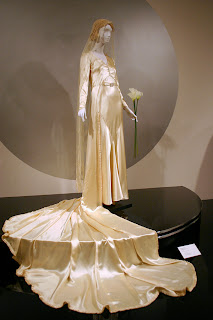 I seem to be on a museum kick. While in Arizona last weekend, we decided to go to the Phoenix Art Museum to spend an afternoon in an air-conditioned atmosphere. What else do you do when it is 104 degrees outside? When we got there we found that a lot of other Arizonans had the same idea. Plus there was a special exhibit going on called Curves of Steel showing some very classy cars mostly from the 1930s that was attracting people's attention. Photographing the cars was not allowed so you'll have to go to the website to see these stunning cars. 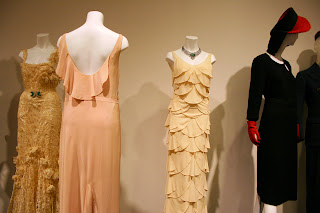 The exhibit ends tomorrow so if you live in the Phoenix area, I recom-mend that you check it out.

Along with the cars, was a display of the high fashion dresses that went with the era and with driving one of these autos. Photos were allowed in this area, so I took a few. Seeing these dresses and especially the gloves reminded me that I have inherited some high-fashion designs myself from my husband's aunt. I have them stored away and don't know if I will ever wear them.

The museum has undergone some expansion since I was there last in 2004. I hardly recognized the place. A new wing has been added that houses a lot of contemporary art. For me, this was the most fun part of the museum. Photos were allowed and the quirky artwork inspired me to try my hand at quirky photography. As usual in museums, no flash is allowed or the use of a tripod, not to mention the fact that there were people everywhere, but this just increases the challenge. I'm not sure the results are all that noteworthy, but it was fun. 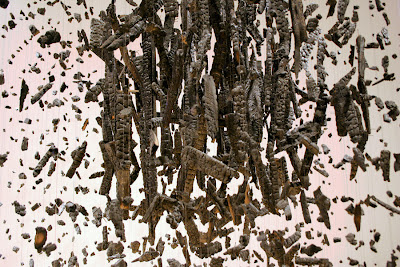 This is a work by Cornelia Parker called Mass (Colder Darker Matter). It was done in 1997. (A similar and earlier work, Cold Dark Matter, hangs in the Tate Gallery, London.) My shot only shows the central portion of this work. It actually fills an entire room and consists of pieces of charcoal suspended from the ceiling by invisible thread to form a cube shape with the center being dense and full and the outer edges more sparse. The charcoal is actually the charred remains of a Texas church that was struck by lightning. The title suggests the cold, dark matter which fills the universe and also a spiritual gathering as well as the solids and voids that are the basis of the sculpture. 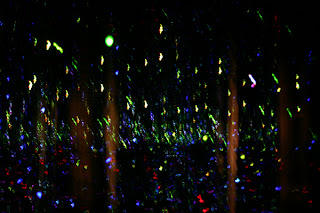 Another room-size sculpture was the favorite attraction of a lot of the young people in attend-ance. In fact, we were directed to this room as a "don't miss it" exhibit by the museum guard who struck up a conversation with us as we waited in line to buy our tickets. It certainly did appeal to my young grandson and I found it fascinating, too! You walk into a dark room lined with black mirrors. Hanging from the ceiling are tiny lights suspended by that invisible thread again (like nylon fishing tackle). The lights change from full color to white only and from low to high intensity. As you walk through (you can't see where you are going, you can't even find the exit!), you set the lights swirling and with all the mirrors you feel you are in a swarm of fireflies. The work is by Yayoi Kusama and is called You Who are Getting Obliterated in the Dancing Swarm of Fireflies. Ms. Kusama has done other works on the subject of fireflies. This one is dated 2005, a very recent work. My photo does not do it justice at all. I wasn't sure I would get anything when I took the picture. It was a very long exposure and there was nothing for me to lean against for support. Kusama is definitely an artist whose work I would like to explore further.