After reading my blog entry for Mother's Day, Grace has asked me a tough question. She wants to know why there aren't more "egalitarian" marriages. She says her generation was promised one and many didn't get it. I put the word egalitarian in quotes because different people will have a different idea of just exactly what an egalitarian marriage is. I assume that Grace means something like a marriage where the husband will do the laundry while his wife is in Antarctica doing scientific work for a month. Her question got me to thinking about the past and about what battles the women's movement fought and won. There has been some progress made!

I became a feminist, not when I arrived home with my first child to find that whereas before my husband and I shared most of the household duties, taking care of the infant was 100% my responsibility (I don't think he ever did change a diaper), but before that, when I was pregnant and discovered that the birthing experience that I wanted to have was not allowed by the hospitals and medical profession. I wanted a natural birth, no general anesthesia, I wanted to have my husband with me in the delivery room, and I wanted rooming-in afterwards so that I could nurse the baby on demand. My doctor agreed to the first request but only one hospital in my area permitted husbands to observe the delivery never mind being a coach and actually having a role in the process. And rooming-in, where the baby is not kept in a central nursery but sleeps right in the mom's room, was a brand-new idea to some hospitals.

For my son's birth, I did get the rooming-in. Because of this, my husband was the only person allowed in to see me and he had to don surgicals to do it. They closed the door to the room to keep germs out, but that meant whenever a nurse or someone wanted to come in the room, they had to knock first and I either had to yell, "Come in," or get up and open the door for them. Yeah, right! Meanwhile, on day two, 30 student nurses traipsed into my room, sans surgical gowns, to have a look at this new-fangled concept in action.

But I was luckier than my mother. When she gave birth fathers were not even allowed in the labor room. They put you to sleep and when you woke up they presented the baby to you, all wrapped up. The nurse would unwrap the baby to show you it had all its fingers and toes, and then re-wrap it and whisk it off to the nursery. And her mother was even unluckier. In 1924, the "lying-in" period for mothers after giving birth was two weeks. After two weeks in bed following the birth of her fifth child, my grandmother developed a clot in her leg that moved up to her heart and killed her.

Judging by my daughter's recent experience giving birth, we have come a long way in this area.

So I joined the National Organization for Women (NOW), and the National Women's Health Network, and subscribed to Ms. Magazine which is now owned by the Feminist Majority Foundation. I joined a consciousness-raising group where about seven of us women met once a week to discuss women's issues. Our battles then were mostly around getting recognition for our work as mothers and housewives (it wasn't even considered "work" in those days), raising awareness about sexual harassment and rape, and of course reproductive rights. Out of the seven members of the group, three admitted to having been raped. One woman told a particularly poignant story. She was a new Asian immigrant who wasn't even sure what the word rape meant. She asked, "If your brother-in-law comes to you in the night, and you don't want him to, but he does it anyway, is that rape?" I've never forgotten her words.

We have come a long way in this area, too. Rape is more completely defined. If a woman says no, it's rape. We don't blame the victim anymore (at least in principle). Sexual harassment in the workplace is dealt with firmly if not completely to every woman's satisfaction. You can walk down the street now without being leered at, whistled at, or hearing comments like, "Wha'cha doing tonight, Baby?"

Our group talked about going back to school and having a "real" career. This is probably the area where the greatest changes have occurred. Below is a graph from the National Science Foundation showing the number of men and women who have earned a master's degree in science and engineering and non-science and engineering fields from 1966 to 2004. Below that is a similar graph for doctorates from 1966 to 2003. 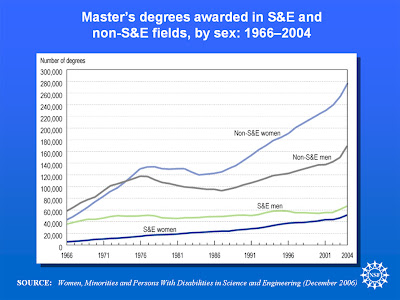 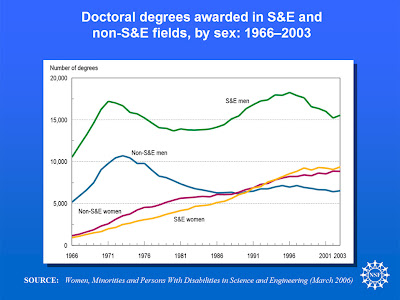 Women may still lag behind men in earning higher degrees in math and science, but we have out-stripped the men in other areas. This advancement has led to more women becoming doctors, lawyers, college professors, policewomen, senators and congresswomen, and just about whatever else they want to be. That has been great for society as a whole even if there is still a lot of work to be done.

In my own field of music and violin playing, I was told that I could teach, but forget about being a soloist or a symphony musician. Since then we have gone from there being just one female player in a professional orchestra (Doriot Anthony Dwyer in the Boston Symphony) to the current situation where, at least in the US, women and men are equally represented and may even out-number the men in the string sections. And as for soloists, we have Kyung Wha Chung, Anne-Sophie Mutter-Previn, Midori, Sarah Chang, Nadia Solerno-Sonenberg, and Hilary Hahn to name a few famous female violinists. My students have many more role models than I ever did.

I know this post is getting long, but that's good isn't it?

Another area of great progress is in women's sports with Title IX which was passed in 1972. Since then we have come to realize the importance of giving our girls a chance to exercise and work together on teams. Grace's daughter can take Tae Kwon Do which would not have been possible before. My daughter chose gymnastics. Female athletes can play on professional teams and earn big bucks and nobody says a word about us being the "weaker sex" anymore.

So we did a good job of raising our daughters but it seems we have a ways to go in training our sons. My own son helps out around the house and kitchen without a word and without having had a good role model either! I have seen him do the laundry, vacuum, prepare meals for himself and my grandson, and clean up the dirty dishes after meals all without being prodded or cajoled. When I asked him what prompted him to do all this since I never taught him the importance of those tasks, and he never saw his father do any of them, he replied that he just sees that his wife needs help so he does it. In other words, he has empathy. How do you teach someone to have empathy?

I can't give you a satisfactory answer to your question, Grace. Maybe it is your turn, your generation's task, to create a world where the glass ceiling gets removed in the business world, where women and men get equal time off to care for their children, and where household chores are shared equally.