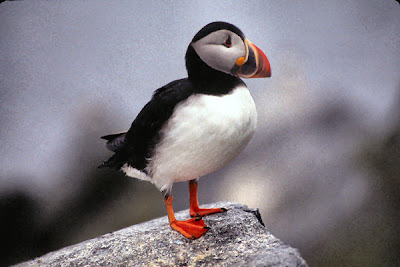 Gee! I haven't played tag or answered a chain letter since I was 11. Grace tagged me in this latest version of a chain letter that has been going around the blogging world. These days, if I receive a chain letter by email, I just delete it, but if the Drs. Eades can be gracious enough to play the game, then so can I. The rules of the game are that once tagged you are supposed to reveal 5 new (or secret?) things about yourself and then tag 5 more bloggers. Actually, this gives me an opportunity to relate some adventures from my past, but I am not going to tag anyone. I am too new to blogging to know anyone besides Grace and Mark to tag!
It will take me awhile to decide which five episodes to tell you about but we can start with the scariest thing I ever did--I walked the plank under orders from Captain Andy! I wasn't going to use his real name, but someone else (Mary Scott) has had the same experience and written it all up complete with photos. I can't believe we weren't the only ones to be foolish enough to trust a modern day pirate!
We were up in Maine for a birding adventure--my husband, myself, my sister, and her husband. We wanted to see the Atlantic Puffin which is abundant off the coast of Maine, in particular at Machias Seal Island. Captain Andy ran a boat service from Cutler, ME to the island especially for birders. Machias is nine miles off the coast from Cutler out in the Atlantic. It is still claimed by both Canada and the U.S., so on Mondays, Wednesdays, and Fridays, they fly the Canadian flag, and on Tuesdays, Thursdays, and Saturdays they fly the American flag, or at least that was the way it was in 1996. I can't remember what happened on Sundays. The plan for our trip was to sail out early in the morning, view the birds from observation blinds on the island, have lunch, and then sail back, weather permitting. That last part was the most important part of the whole trip.
The morning of the boat trip was cold and rainy, even though it was late June. We realized too late that we had not packed the right kind of clothes for a trip like this, but we did the best we could. We really needed wet-suits! We were covered up well enough on the one-hour trip out to the island, but once we had to get out of the boat, staying dry was hopeless. The transfer from the boat to the island was done by skiff but there was no dock, only a rusty old ramp. We were soaked when we started up the ramp to receive the greeting of the Arctic Terns nesting on the rocks on either side. They were not happy to be disturbed and they dive-bombed us! Several landed on my head.
The island was just a pile of rocks with grass growing on top. There was a lighthouse, a house for the keepers, and helipad. We trudged up the wooden ramps to some little wooden blinds set up along the rim of the island. There on the other side were the puffins. They and a few Razorbills were a delight to watch but with the four of us stuffed in one blind, there was little room to move about. I was afraid my camera would be ruined by the rain. I had it in my backpack which I hung on a nail because the floor of the blind was an inch deep in water. Then I noticed water dripping down the wall right into the backpack! 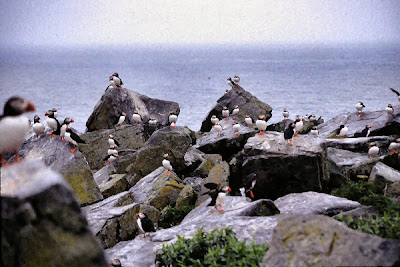 We had all taken sea-sickness pills but I still felt a little queasy on the boat. Now, standing in the cold blind, feet soaking wet, I started to shiver and the queasiness returned. We took some pictures, but it was very dark and still raining, and we began to wonder if anyone was going to come and get us. We were not allowed to wander about on our own. We watched the puffins as they watched us. It really seemed like they were as curious about us as we were about them. Some were down under the rocks and they peeked out at us. That's where the nests were. A couple of birds flew in with herring in their beaks to feed their young. They would extend their feet to land and then plop onto the rocks.
After about 45 minutes, someone came to fetch us. Instead of exchanging blinds, as we were told would happen, we were escorted back to the landing to return to the boat. The weather was going to get even worse and they had to curtail our stay. So no lunch.
As we were walking down the rusty ramp, two men passed us carrying a wooden plank. Yes, they were going to make us all walk the plank! The skiff was waiting at a shallow spot between some rocks, but the tide was going out and in the Bay of Fundy the drop is 20 feet! So we couldn't just walk from the ramp to the skiff as we had done when we arrived. They put the plank across from the ramp to the rocks over swirling, gray sea water, and gave us our orders. We were to follow the leader, one by one, to the other side. When one person was safely across, the next could start out, and there were about 15 of us. I did not stop to take any pictures of this event, we were all too scared, but Mary Scott can show you what it looked like on a dry, relatively calm, sunny day.
As I stepped onto the plank, I tested it for slipperiness and found it to be OK, so I ventured across and made it to the other side safely. We all did, I am happy to report. The rocks on the other side were very slippery, however, because they were covered with wet seaweed. I was afraid of slipping and twisting an ankle. My sister fell, but I did not see it happen and she didn't get hurt.
Once safely back aboard the boat, the Captain pointed out some families of Common Eider along the shore, but I was still shivering and was not interested. The trip back was easier than going but the rain did not let up. Captain Andy showed us Black Guillemots and Wilson's Storm Petrels and tanks of farmed salmon. But when we got to the dock at Cutler, we discovered there was one more test of our endurance waiting for us. The top of the dock was now 20 feet over our heads, and the only way to the top was straight up a slippery, wooden ladder. Everyone but us four were so happy to be back on shore that they eagerly climbed up, but we took the Captain up on his offer to be deposited on a sandy beach even though it meant another 20 minutes or so before we got there.
My brother-in-law won't let me forget this trip. He brings it up every time we play the game of, "Remember when.... "
Posted by Grandma Ann at 1:24 PM