No doubt about it, this is soup and stew weather here in sunny Southern California. I have a pot of my famous turkey stock simmering on the stove right now. I will turn it into soup later on today. Meanwhile, it fills the house with warmth and a wonderful aroma that makes all my students feel hungry when they come for their lessons. Nothing gives me the gratifying feeling that I am taking good care of myself better than homemade soup.

Recently I have made several soups and stews that fit perfectly into my diet regimen which on its simplest terms means no grains, no dairy except for butter, and no potatoes. There's a whole lot more to it than that, but it will take me months to get into all the details. For now, here are some recipes to whet your appetite and show you how it's done. (Grace warned you that I would do this.) 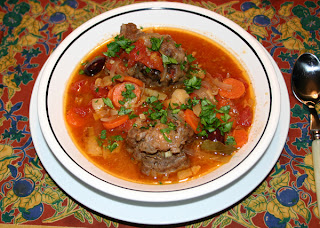 Last week I made an oxtail stew that was just yummie! (It's actually steer these days.) The recipe was adapted from the Williams Sonoma cookbook, Soup and Stew. The changes I made were minor but make a big difference to me. One was no flour. The soup comes out thick enough without it. No anchovy paste. An expensive item which adds a lot of salt. And the pièce de résistance, organic, sugar-free pancetta instead of the bacon. That's another expensive item, but you only need two slices and the flavor is out of this world. The white wine adds richness to the sauce which tastes even better the second time around. Also, I don't bother to pit and chop the olives. I just throw a few in at the end. If I can get my teeth to work their way around the bones in the oxtails, then I can certainly do the same with the olive pits and it saves a lot of time.

Bones--that's what these two broths have in common--long simmering of bones in water or other liquid. I'm sure that the first thing man did after he invented fire was to find some kind of container to hold water and throw in some bones. That was how he got his minerals, especially calcium. A little bit of wine or vinegar in the broth is what draws these minerals out of the bone, cartilage, marrow, and vegetables, and the broth makes them easy for our bodies to assimilate. The gelatin in meat broths also help to sooth digestive disorders. My turkey stock is very rich in gelatin because I add three or four chicken feet to the stock pot. (I know that if you are not a farmer, that probably sounds gross, but you don't look at them, you just throw them in, and they get taken out before the actual soup is made.)

I start with some turkey parts--wings and drumsticks and the chicken feet. If these have been frozen, I don't even bother to defrost them first. I put them in a baking dish and bake them for a half an hour at 400 degrees. Then into the stock pot they go along with 4 quarts of water (or enough water to cover them); 1/2 cup of vinegar (I use raw apple cider vinegar); and 3 celery stalks, an onion, and 2 carrots chopped; and lastly, a teaspoon of crushed dried green peppercorns. Then you let things sit partially covered for one hour to "rest." Turn on the heat and when it starts to simmer, reduce the heat to keep the stock at a simmer. Do not boil. Then you can go sit and knit and leave it for 2 to 24 hours. I started mine yesterday afternoon, put it in the fridge overnight, and reheated it this morning. The longer it simmers, the richer the stock.

After the stock is done to your liking, remove the turkey and chicken parts and strain the stock. I cut the meat off the bones, an easy job because by now it is falling off, and add it back to the strained stock. Then comes the fun part. You can add whatever vegetables and spices you like: fresh carrots, celery, parsnips, zucchini squash, tomatoes, whatever you have on hand--just no pasta and no potatoes. I'm on the fence as far as beans and peas go. Some of my experts say no legumes, and others don't care. This may sound like a lot of work, but if you have made a big enough pot, it will last for several meals and there might even be some left over to freeze for those times when you feel like you are coming down with something.

This recipe was taken from Dr. Mary Enig and Sally Fallon's book, Eat Fat, Lose Fat. Dr. Enig is the lady I trust on the subject of fats in our diet and I will have more to say about her later. You can read her books or view her ideas on the web pages of the Weston Price Foundation.