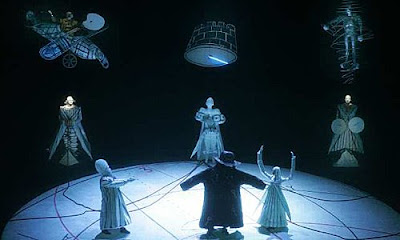 I got a chance to see the dress rehearsal for Wagner's 1869 opera Das Rheingold last night. It is the first of the cycle of four operas that the L.A. Opera is putting on over the next two years, culminating with the complete cycle in May and June of 2010. It is a milestone for Los Angeles and for L.A. Opera that they have decided to take on this gargantuan task. It's a very expensive undertaking at a time when expenses are difficult to meet for everyone. But boy, is the topic ever timely!
The story of Das Rheingold concerns Wotan's foolish desire to build himself a MacMansion (Valhalla) and how he goes about paying for it. Sound familiar? He has promised his builders, two giants, that he will give them his sister-in-law Freia as payment. That may not be familiar, but many people have in a sense sold their family's future in order to have a nice home now. His wife, Fricka, is outraged, naturally, but Wotan assures her he never meant to make the payment anyway. That sounds familiar, too. I'm thinking of those adjustable rate mortgages that when ballooned left their holders without the ability to pay them. The excuse I heard many times was that people never intended to hold the original mortgage to term and expected the banks to re-finance at that point. In the opera, there is a lot of haggling with the builders, but the giants finally agree to accept the gold that was stolen from the Rheinmaidens in payment instead. 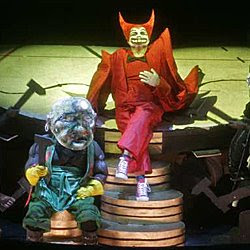 This would be a very good deal indeed in today's market with gold selling at over $1000 an ounce. The newspapers are calling this a "flight to safety." One wonders where people are putting this gold and how they intend to sell it once things stabilize again. As with today's bubble economies, the Nibelung dwarf who stole the gold, Alberich, has used it to seek out even more gold and has forced his fellow Nibelungens to do the dirty work of mining for him. One thing that he forges from the gold is the ring which is the object that ties all these operas together and from whence they get the collective name Der Ring des Nibelungen. Yes, there was a ring before Frodo. This ring will give the wearer untold powers, the power to win all the world's wealth. By the end of the opera, Alberich has put a curse on the ring that it will bring only misery and death to the wearer. 'Nuff said.
Putting on the Ring Cycle has become a rite of passage for opera companies and the cities that support them. People travel from all over the world to see the latest production. But it seems to me that the sets, costumes, and design of the production has overshadowed the music and the singing. This was certainly true of last night's performance. I think I got most of the symbolism behind the stage setting: heaven above where the gods reside, the earth in the middle, and the fire pits below. But I spent a lot of my time trying to figure out what those long ropes were supposed to signify, and the light sabers were laughable, like the one I bought my grandson at Disneyland. The opening was very effective with the solo horns and the stage covered with billowing black cloth to represent the river. But the costumes were clumsy and awkward and seemed just to get in the singers' way. And I wonder why none of the females in the cast were allowed to show their hair and instead wore ghastly white skull caps. They looked bald.
I have to keep reminding myself that this was a rehearsal after all, and that the company will not pull out all the stops until opening night on Saturday. But I think the $11m (out of a $32m budget) for the design and staging could have been better spent. Just like in our present world, things have become more important than the message.