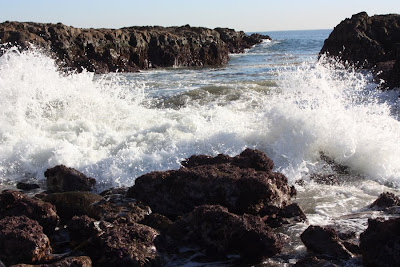 Saturday was a perfect day at the tidepools at Abalone Cove. The weather was a balmy 75 degrees, there was no wind, and best of all, there was a very, very low tide of -1.9 feet at 2:24 pm PST. That's about as low as it gets along the Los Angeles coast. I was amazed by the difference between what I could see Saturday and what was visible the last time I was at the tidepools like this row of stone ridges covered with Surfgrass, Phyllospadix torreyi, and Feather Boa Kelp, Egregia, that emerged from the water. 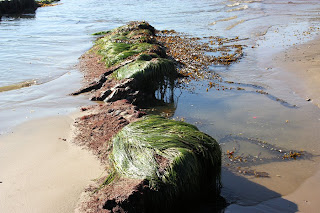 Of course, all these good things brought out the people, but that turned out to be a benefit for me rather than an annoyance. A cub scout troop was in attendance and that meant there were several knowledgeable adults around to help find things and explain what was found. Whenever a group gathered around one spot, you could be sure that there was something interesting to see, like the crowd that gathered around this expert octopus catcher who let anyone who dared to hold the slippery creature before putting him back under his rock. 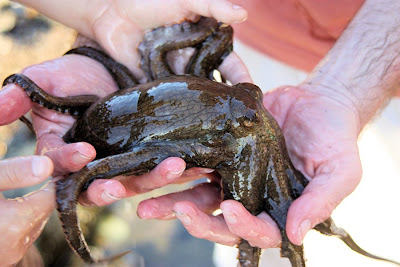 That's a two-spotted octopus (Octopus bimaculoides), in case you are interested. You can't see his spot very well in this photo. It's below his eye between two of his legs.

Now my philosophy of things is that I observe nature as she presents herself and when I take photos, I do the barest minimum to arrange a shot. I might get a weed out of the way of a wildflower photo, for example, but that's it. I do not and did not stick my finger in the pools of water to stir things up, I didn't lift any creatures out of the water, didn't drop rocks to catch the attention of the octopi (I saw a total of four on Saturday), or in any other way disturb the environment. But other people do not have this reticence, especially the children who were very good at spotting things, not to mention climbing over the slippery rocks like little monkeys. One little girl presented me with this Bat Star (Patiria miniata) whose photo I obligingly took before putting him back in the water. This sea star was pretty hard to find. I only saw two and neither one did I find myself. 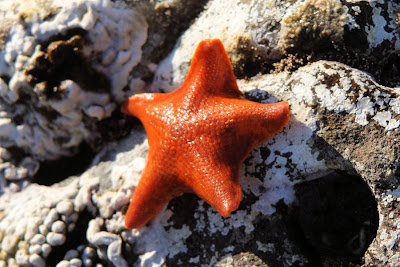 Here is a Warty Sea Cucumber (Parastichopus parvimensis) that I was observing as he squirmed between the rocks and some Sea Urchins. He stretched himself out, turned his "foot" over and displayed the foot pods to me. Later the same little girl found him, but when she lifted him out of the water he contracted into a little ball and didn't move. 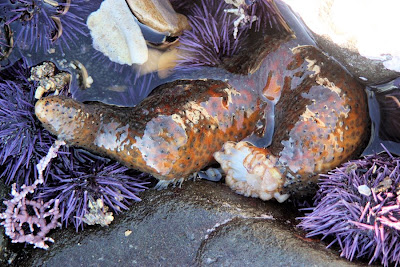 Now I know that children learn by touching and at least one little girl had to be coaxed (by her mother) into touching this California Brown Sea Hare (Aplysia californica). She proclaimed him to be "soft and squishy." Her finger helps to give you an idea of the size of the animal. 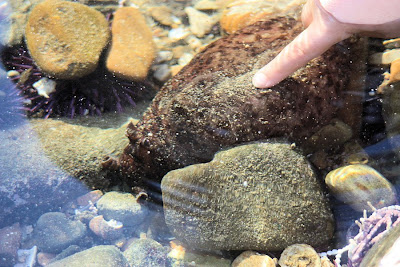 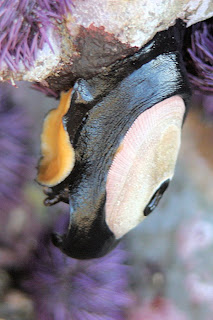 There was another young woman with a pail of goodies who really seemed to know what she was doing. (She was even wearing special tide pool shoes.) Turns out that she has a degree in marine biology but now is a practicing nurse. She helped me to identify this Giant or Great Keyhole Limpet, Megathura crenulata. I found this one myself hanging from the underside of a rock and took a picture of it because it looked so weird, but she had two more of them in her bucket. Usually you only find the empty shell.

Another sea star that was hard to find was this Spiny Brittle Star, Ophiothrix spiculata. Grace had said that they found too many to count back in November, while I could only find two and the second one was a tiny baby inside of a hollowed-out sea urchin shell. Maybe they have a season or maybe the tide was too low and they were all hiding under rocks. 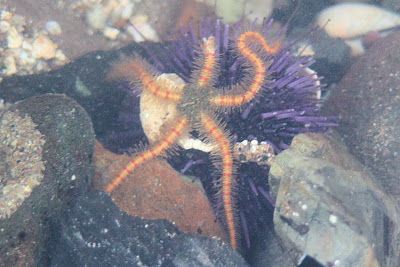 This one appears to have lost part of a leg. Apparently, they can regrow dropped legs, but it takes a few months.

Speaking of legs or arms, here is a sea star that has so many legs it doesn't know what to do with them, the Sunflower Star, Pycnopodia helianthoides. This fellow has at least 16 (they are hard to count), but there can be as many as 24. You can see the suction cups at the end of some of his tube feet (click on the photo for a closer view). A large Sunflower Star can have 15,000 of these feet. Imagine trying to coordinate them all! Fortunately, people left this one alone and didn't try to pick him up. He was wedged between some large rocks and didn't move very much. The water level was too low. 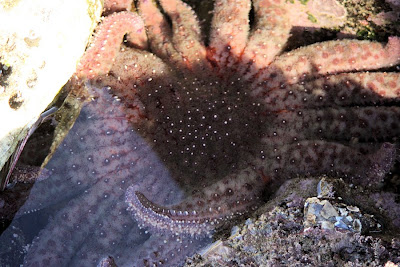 While the little kids were squealing and yelling with delight over the octopi and other sea animals, older kids, the teenagers, and young adults were gathered on the rocks trying to get inside this cave out at the point. I heard someone say it goes back about 40 feet and is only accessible at one of these very low tides. 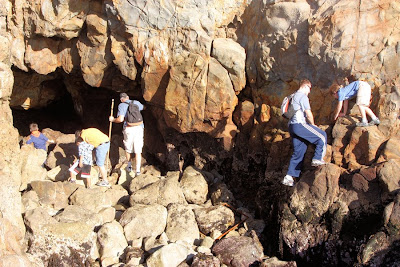 I did not venture across this gorge. I still may be able to climb around the rocks like a monkey, but I am an old monkey! But I was fascinated by the interesting rock formations we were walking on. 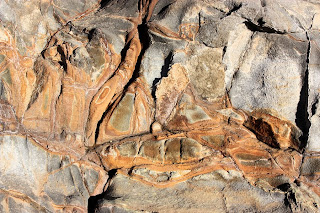 There will not be another tide this low during the daylight hours in all of 2009. The next best thing will be a -1.7 tide one day in February and another on December 31st. So the sea creatures are covered and safe once again, at least from inquisitive humans.