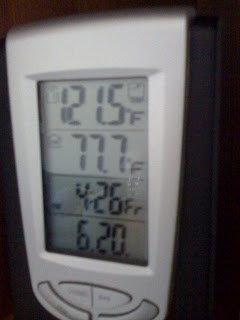 Is it hot enough for you? My son in Arizona sent me the photo on the right saying, "Yeah, but it's a dry heat." The outside temp is at the top with a little arrow showing that the heat was still rising (that's 121.5 degrees Fahrenheit, in case you can't read it). The second number is the inside temp. He has air conditioning. So I sent him back the photo below. The outside temp is on the left and the inside temp is on the right. But my gauge is in the sun in the afternoon, so this is not the temp that the weather forecasters will report. But it felt that hot! No air conditioning here. 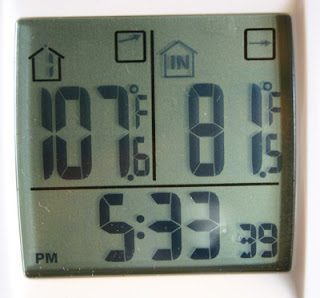 Dry heat does make a difference. I can remember temps in the 90s being insufferable back in New England because of the accompanying high humidity. I learned as a child to pull down the shades and close the drapes early in the morning while the house was still cool to keep the heat out. I still do that. But last night the temps did not go down very much, so we are starting off the day hot.

Happy Summer Solstice! And stay out of the sun.

Meanwhile, my daughter alerted us to the fact that the Moon, which was full on the 18th, in conjunction with the solstice, will appear very large as it is rising as it usually does in October when it is called a harvest moon.

The full Moon of June 18th is a "solstice moon", coming only two days before the beginning of northern summer. This is significant because the sun and full Moon are like kids on a see-saw; when one is high, the other is low. This week's high solstice sun gives us a low, horizon-hugging Moon and a strong Moon Illusion.

I have always wondered about the explanation for this illusion. They used to say that it was because the Moon was being viewed through several layers of atmosphere which would magnify it. Now they say it's just an illusion because we are looking at the Moon with familiar things like houses nearby. 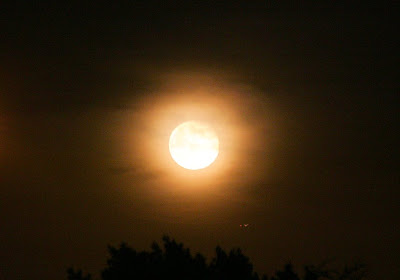 I wanted to do a little experiment and compare photos of the Moon taken this week with photos that I took of the Moon during the eclipse last February when the Moon was much higher in the sky. Now this is a totally unscientific experiment, mind you. First of all, I missed the moonrise on the 18th. The above photo was taken on the 19th and I couldn't see the Moon until it was up much higher than it needs to be to see the effect because of fog drifting in from the east. (Fog rarely comes from the east. That's just another indication that our weather pattern is unusual.) I did use the same camera with the same lens though, and the same settings. There were similar foggy conditions, too.

The Moon does appear to be the same size in both photos except for the glow from the sunlight which makes it appear to bulge out in the lower photo. There are some trees and an airplane going by in the first photo, but I don't think you can see them. The plane does make the Moon look big. 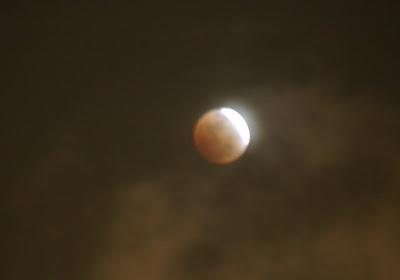 In the fall when I am driving to rehearsal, I get a good look at the harvest moon and it does look huge. There is one point where I am up high enough to see the horizon clearly. The only problem is it is up on a bridge, where I can't stop to take a picture!