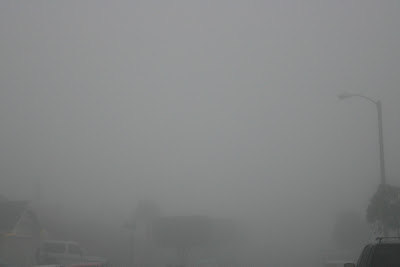 This is the scene that greeted me yesterday morning when I went out to get the newspaper. When hot land meets cold water, you get fog, and the land has been very hot. The afternoon before the scene looked like the photo below, at noon! That's the noonday sun trying to break through the smoke from the fires that have ringed the Los Angeles basin. Needless to say we have not been going outdoors very much. 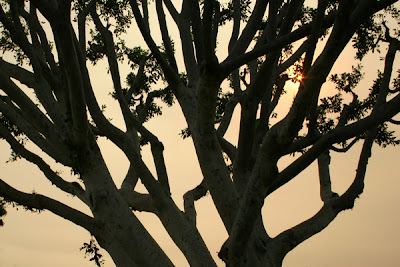 Today's L.A. Times has an article about the Santiago fire in Orange County which is the one that has caused most of the smoke for us. The fire is threatening a canyon called Silverado Canyon in which I have a special interest. I have a friend who lives there, another independent woman, trying to have her cake and eat it, too. The canyon is somewhat remote and rural, yet it is within driving distance of all the Southern California civilized amenities like concert halls, museums, and shopping centers. I toyed briefly with the idea of buying a home there myself after my husband died. It helped to ease my grief to think about starting a new life doing what I have always wanted to do, i.e., have my own private nature reserve in a remote area where I would spend my days feeding the birds and playing my violin. But after making a visit to the canyon, I changed my mind. It was a fire waiting to happen. Very dry woods on the slopes of a very narrow canyon with only one road in and out. The road stops abruptly at the top of the canyon and you have to u-turn to drive back out. Uh-oh thought I.

The current residents have been evacuated once and were allowed to return to their homes only to be told to evacuate again. What makes this all so much more tragic is that the Santiago fire is believed to be the result of arson. Unfathomable!

This morning things are looking more normal here. The fog is not so thick but the skies are overcast. There was even blue sky showing straight overhead yesterday afternoon. I hope the skies clear tonight because there is a new comet to see—Holmes 17P. It was a faint 18th magnitude comet in the constellation Perseus a few days ago that has suddenly brightened to almost magnitude 2 which makes it visible with the naked eye. I was able to see it last night with my binoculars even though the skies were cloudy. To see this new celestial wonder, go out at about 10 or 11 pm and look up into the northeast. The moon is full right now but the comet is so bright that it doesn't interfere. Look to the left of the moon and straight up from Capella (a very bright star). Last night the comet looked like a big fuzzy ball with no tail.