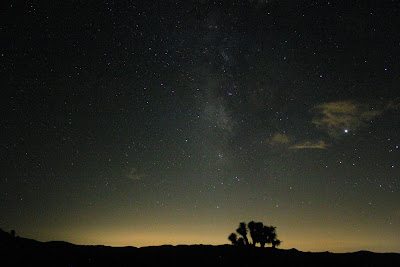 Friday morning I was all for cancelling our trip to Joshua Tree National Park to see the Aurigid meteor shower. The weather forecast was calling for a heat wave and the LA Times lead article was about the heavy traffic travellers could expect on this Labor Day weekend. Going out to the desert in a heat wave seemed just nuts to me! But we decided to give it a try and maybe cut our weekend short by one day. Thankfully we didn't do that, and had a great time. In fact, the weather at Joshua Tree was more pleasant than the hot and muggy weather we came back to yesterday.

The desert is having what they call monsoon weather right now. There were thunderstorms every afternoon and even some real rain on Saturday afternoon. The temperature dropped 30 degrees in half an hour and then slowly rose back up again after the rain stopped. The storms made for some spectacular cloud formations and beautiful sunsets and miraculously, the clouds mostly went away when it was time for us to do our star-gazing. You can see a few wispy clouds around Jupiter in the above photo. 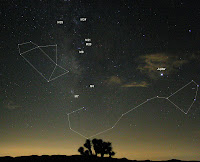 If you click on the photo you will also see zillions of stars. In fact, I was pointing the camera toward the Milky Way and the very center of our galaxy is almost in the center of the photo. The brightest "star" you see is actually the planet Jupiter and the cloudy area that runs vertically through the middle is the Milky Way. The constellations Sagittarius and Scorpius are easily visible, and to my great surprise, some of the nebulae and globular clusters of the Messier catalogue are visible as well. The glow at the horizon is from the city lights of LA. You can't escape them. There was some haze (smog) out in the desert Sunday night when this photo was taken (at 9:26 pm) which reflected the lights even more. And the light is brighter in the photo than it seemed to us. I have outlined the constellations and labelled some of the Messier objects that we looked at with the telescope in the photo on the left (the ones you can actually see in the photo).

The meteor shower was a success. I personally saw 18 in a span of one hour, but the people around me saw many that I did not catch. Besides my friends, Kathy and Bart, who drove up with me, a family came up from Orange County and joined us in the Hidden Valley parking lot in the early morning hours. Kathy, Bart, and I had been there all night, viewing the stars in the southwest before the moon rose, catching some sleep, and then turning to face the northeast and Auriga to see the shower. Actually, if you look right at the radiant of a meteor shower you see pin-points of light or short meteors. If you look to the side or away from the radiant, you are more apt to see long streamers. Bart caught a very long streamer when we were there Sunday evening for more viewing.

These photos were all taken Sunday. We didn't stay all night this time, but left when the moon came up at 10:30 pm. The photo below shows moonrise and the constellations Cassiopeia and Andromeda. The Andromeda Galaxy was easily visible with binoculars and even the naked eye for those whose eyesight is better than mine! And yes we did hear a Great Horned Owl hoot in the middle of the night. 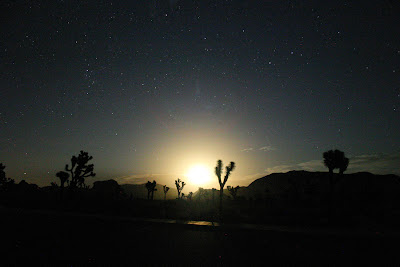 Alas, this wonderful experience may never be repeated. A park ranger came along Sunday night just after we had set up to tell us we were in a Day Use area and really shouldn't be there after sunset. His job was to lock the gate at the entrance to the parking lot. Fortunately, he seemed to be something of a star-gazer himself and knew how difficult it would be for us to move to a new location now that we were all set up and he let us stay if we promised to lock the gate behind us when we left. We had asked at the Visitor's Center when we first arrived where we could go to do some astronomy and were told that this location along with Barker Dam was OK. However, the ranger informed us that both were Day Use areas. So I asked him where we could go "legally" the next time, if there ever is a next time, and he asked us what kind of car we had. He said that he himself went down the Geology Tour dirt road for about a mile to view the Perseids.

Astronomy has got to be one of the most rewarding and frustrating of hobbies!
Posted by Grandma Ann at 5:28 AM