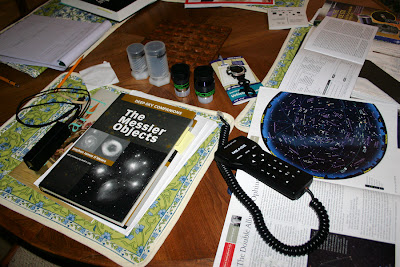 I had a big night last night and the mess I left on the kitchen table was still there when I got up this morning. Normally I am an early-to-bed, early-to-rise sort of person. My natural rhythms are more in tune with the birds than they are with the stars but last night at about 10:30 p.m., I decided to go out and do some star-gazing. The night was cool, the sky was clear, and there was no wind—good seeing conditions. Plus with the moon getting closer and closer to full, I thought it was the best time to look at some Messier objects in the constellations Scorpius and Sagittarius. The moon is due to pass right through that area in the next week or so as it approaches its destiny with the Earth's shadow.

I have used my telescope only rarely since my husband died. Actually, it's his scope and while I had helped him to set it up in the past, I never had a chance to do it by myself. In the past two years, I have gotten it out a few times and used it manually, but I have never operated it in "GoTo" mode. The scope is a Meade ETX with the AutoStar feature which is a computerized system that allows you to just push some buttons to automatically find over 30,000 celestial objects. Sort of like using the remote on your TV. (The art of reading star charts and "star-hopping" to find an object may be lost someday soon.)

However, to get this feature to work properly requires a careful setup of the scope and an initialization of the computer. I was afraid it would all be beyond my capabilities to figure out so I have procrastinated doing it. But with my trip to the desert to see the meteor shower on Labor Day weekend coming up, I thought it was time to get the scope out and learn how to use it properly. BTW: you don't need a scope to see the shower, just a comfortable reclining chair and a blanket to keep warm, but I plan to do some other star-gazing while I have to opportunity to be in a really dark place.

On Friday I set the scope up in my living room and read through the manuals. Saturday night, I set it up on the front sidewalk and had a look at the moon and Jupiter. One sure way to attract your neighbors' attention is to set up a telescope on the front walk before sunset and I didn't really want any attention because I didn't know what I was doing. Last night, on impulse, I set it up again but because it was so late, no one was out and about.

My street is not very dark. There are the city lights to contend with, plus a streetlight right in front of my house. Fortunately, the light is intermittent because it is slowly dying and I have not called anyone to come and replace the bulb. I also have a big tree in front of my house which blocks the view a bit but also blocks the streetlight. Despite these problems, I managed to get the scope set up and started gazing.

After a look at Jupiter again to make sure I had good alignment, I slewed the scope over to M8 (the Lagoon Nebula) followed by M7, M6 (the Butterfly cluster), M25 (an open cluster), and the thrill of the evening, M31 (the Andromeda Galaxy). I attempted to see M16, M11, and M103 but was not successful because they were either too faint, or because my tree was in the way. These are all standard, run-of-the-mill viewing objects for the guys in the Astronomy Club, but for me it was exciting because I had set the scope up myself, and because I could actually see these deep sky objects in spite of all the light pollution.

Ever since Charles Messier published his list of "comet masqueraders" in 1784, they have been favorites of amateur astronomers because they are fairly easy to see with a small telescope. Some are even visible with the naked eye (although not in Los Angeles). There is even a Messier Marathon in the spring when people try to see all 110 in one night. They are an eclectic collection of celestial treasures: 39 galaxies, 57 star clusters, 9 nebulae, a supernova remnant (M1, the Crab Nebula), a swath of the Milky Way, a tiny grouping of stars, a double star, and even a duplication. The most famous Messier object of our time is M42, the Orion Nebula with its central Trapezium, which is starting to be visible in the early morning sky. It is spectacular.

I rounded out the evening with a look at Shedir in Cassiopeia. It's a nice bright star with a faint companion making it a Double. With a little more practice, I may be ready to throw a star party for the neighbors.