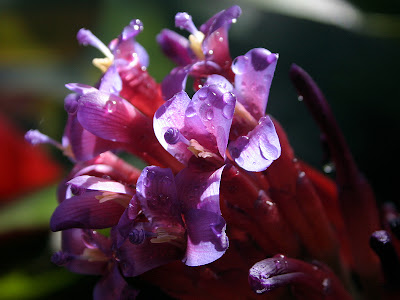 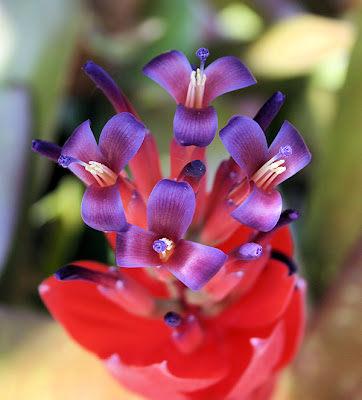 My bromeliad bloomed this week. Usually this plant has bloomed in November. It's really early this year. I originally got this plant from Kathy. I treated it pretty badly at first. I left the cuttings she gave me in a plastic bag on the patio table, half in half out of the bag, for six months before I got around to putting them in a pot. It took several more years for the plant to bloom the first time, but in 2004 I had a spectacular display of 12 blooms all at the same time.
Once a plant has bloomed, it will never bloom again in that spot, but it will send out new "pups" which will bloom eventually. My plant had gotten so huge, I had to cut it back last winter. The pot kept falling over. The bloom on the left above may be the only one I get this year. The other two photos (top and bottom) were taken in November of 2004. 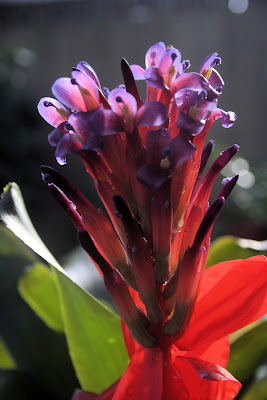 That was one of our wet years and we had just had a rainstorm during the night. (A surprising number of our rain showers happen during the night. This is truly Camelot, which is one reason why so many people want to live here.) I keep the plant on my patio where it gets shade most of the day but gets dappled light in the morning. I got up early to take photos just as the early morning sun started to light up the blooms.

I don't know the specific variety of bromeliad that this is and a search on the web didn't bring any results. If there are any bromeliad experts out there, I would love to know the full name of this spectacular plant.