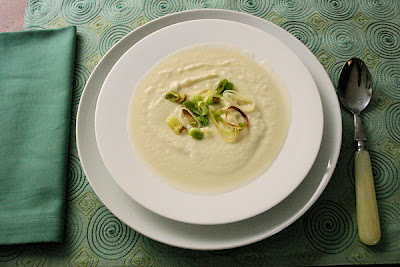 Summer is here! Although it hasn't gotten very hot in LA yet, my thoughts have turned to light summer meals that don't require a lot of cooking. Here are three of my favorite cold summer soups.
The first two are adapted from the book, Raw, by Charlie Trotter and Roxanne Klein. This is a beautiful cookbook (?). Cookbook isn't the right word because none of the recipes inside involve cooking. Everything is raw as the title indicates, although they do make good use of a dehydrator. Their definition of raw is food that has not been heated to higher than 118 degrees F. The idea is not to kill all of the beneficial enzymes which help you to digest the food and which also act as catalysts for the metabolic reactions that take place in the body. I am not a total advocate of eating everything raw, but I do find that for me raw fish and raw salads, etc. are very easy on the digestion. When I had to cook the life out of everything my husband ate, the meals sat very heavy on the stomach.
The soup pictured above is a creamy cauliflower soup made with raw cauliflower. It's very simple and easy to make if you have a good blender. It's basically chopped cauliflower, water, olive oil, red wine vinegar, and salt. I made mine with a special Vinaigre de Banyuls, a sweet vinegar, imported from France. If you want to make this soup, use a good quality vinegar. It makes a huge difference in the flavor. Just throw everything in the blender and voila! You can top it with all kinds of things. I love a drizzle of olive oil on my soups and also used frizzled leeks (recipe from Vegetable Heaven by Mollie Katzen) for this one. Cauliflower comes in various colors, too. This week I had orange soup and I can't wait to try purple. The taste is the same, just the color is different. Someone suggested that broccoli might be used in the same recipe, but although I haven't tried it, I think the broccoli would not be as creamy. 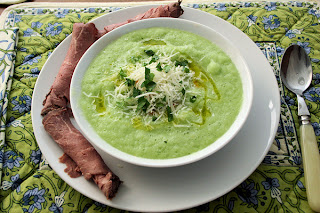 The second soup is simplicity itself, just cucumber, olive oil, lemon juice, and salt thrown into a blender. I use either English cucumbers or Japanese cucumbers and I peel them partly in zebra stripes. Cucumbers are highly recommended for their potassium content by the author of Fiber Menace, Konstantin Monastyrsky. He makes a cucumber juice drink which is very similar to this soup and has some every day. He says that it is potassium and not the proverbial 8 glasses of water per day that keep constipation away. Good elimination notwithstanding, this is a very elegant soup and I would eat it anyway. Here it is paired with rolled slices of roast beef from the deli and topped with raw milk goat cheese for a perfect lunch with no cooking involved. 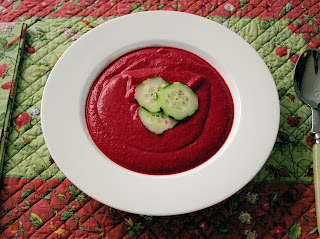 The third soup does invlove some cooking and is higher in carbs. I had all these beets collecting in my vegetable bin because I would eat the tops and store away the bulbs. What to do with them? Soup! This one was adapted from the recipe for chilled beet soup in The Book of Yogurt by Sonia Uvezian. I bought this book back when I was making my own yogurt (which I have started doing again, by the way). Instead of yogurt, I used coconut milk. I should have written the recipe down because I made quite a few changes from the original. For example, no potatoes and no broth. I steamed the beets and peeled them, sautéed some onions in coconut oil, added the beets, lemon juice, a little chopped cucumber, coconut milk, and enough water to make it the consistency I wanted. I used my hand-held blender and turned it into a pink creamy delight right in the pot. Then, of course, it had to be chilled. The beets became even more frothy after being chilled so the soup was very thick.
Posted by Grandma Ann at 8:44 AM