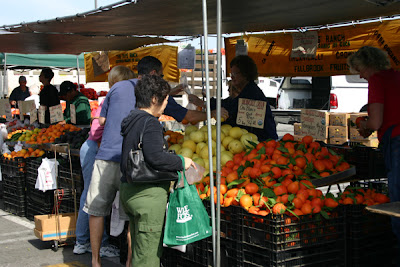 This morning I went to my local farmers market to see the sights as they say. I don't know why I had never gotten down there before except it happens only two days a week and something would always come up. An LA Times article about the best farmers markets in the LA area, in which mine was listed as one of the top ten, prompted me to finally give it a try. 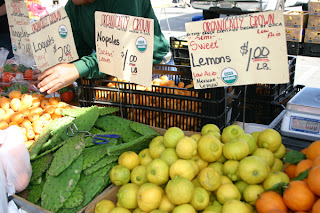 Either because of the Times article, or because it is spring, or just because this one is highly rated, the market was jammed with people when I got there just after opening time. It took me ten minutes just to find a place to park. Some people, the cognoscenti no doubt, had already made their purchases and were leaving so spaces were opening up, but there were three cars for every open space.
Once inside, I found the atmosphere to be something like a county fair complete with cooked food vendors, picnic tables, a performing guitarist/singer, and a balloon artist. There were all sorts of things on sale, many which fall more into the arts and crafts category than farm produce. There were flowers but also plants including bonsai and epithelia in shells. There were bottles of olive oil, tapenades, hummus, and olives. Foods cooked ready to eat included hot dogs, barbecued chicken, candy apples, popcorn, and corn on the cob.

Once you got passed all this you got to the real foods laid out on tables with plastic bags provided to carry your choices. It helped to have lots of small bills on hand to make purchases. There were all the usual vegetables for this time of year in Southern California including zucchini, artichokes, beans, peas, peppers, beets, turnips, and potatoes. Greens of all kinds were on display including some Japanese plants I had never heard of. And there was citrus: grapefruit, oranges, tangerines, lemons, all reasonably priced.

Some of the produce had probably come up from Mexico and frankly did not look very fresh, but there were farms that one might call local and there was some food labelled organic. After reading Nina Planck's book, I didn't worry about that too much at a place like this. She says that lots of times the food is organic, no pesticides were used, but the farmer has not gotten certification from the government and so can't advertise that his crops are organic. 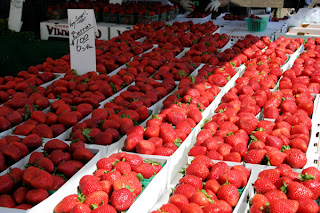 There were some chickens and eggs, including green eggs (no ham), and one booth of grass-fed bison. (I hope there isn't any other kind.) But that was the only meat I found (other than the hot dogs).
And of course, strawberries!

I didn't intend to buy anything, my refrigerator is already full to bursting, but a few things did catch my eye. The avocados were really cheap, as were the lemons. And since my arugula plant is done for the year, I picked up some more. 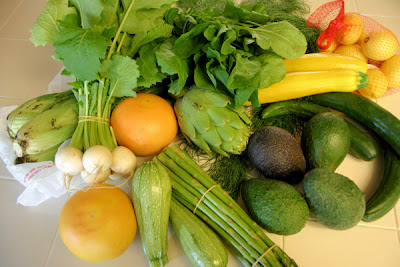