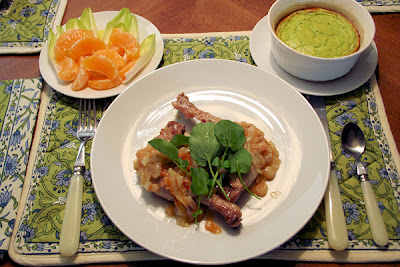 My sister called me the other night when I was in the middle of making my dinner. I thought she might like to see how it turned out. It was delicious, Sis!
Those are duck legs covered with sweet Vidalia onions and a watercress garnish. The flan was made with lovely small zucchini from the farm stand and raw sheep's milk cheese and fresh eggs. The salad consists of Belgian endive and a tangelo with flaxseed oil dressing. The recipe can be found in the Turkey and Duck issue of Time/Life's Great Meals in Minutes. (You can get it now for $0.01!)
This series came out in the 80s and was a mainstay of my cooking repertoire for a long time. The recipes are all for four people and everything is made from scratch including chopping your own fresh herbs. Naturally, this takes time and we used to joke that yeah, it's meals in minutes, but they don't tell you how many! The meals are designed by a variety of chefs and are very creative. I plan to pass this set of cookbooks on to my daughter someday. By the way, this meal really was a meal-in-minutes. It took only 60 and that included chatting with my sister on the phone while I cooked. 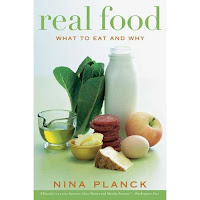 The whole meal was inspired by two things: the duck was on sale, and I just finished reading Nina Planck's book, Real Food. Planck espouses my own philosophy of diet and nutrition which I stated earlier, and that is, just eat whole foods and don't worry too much about counting things like calories, carbs, etc. Planck has read all the books that I have read and then some and has taken the time to delve deeper into the research and has come up with an excellent synthesis of a very complex subject. She will tell you what both sides of a controversy say (for example, whether or not to eat grains or dairy) and then tell you what she does, leaving you to decide for yourself what you want to do, but with a strong hint that she leans a certain way! She writes about food in such an appealing manner that I just wanted to run out and buy some new ingredients and try a new recipe.
If you want to know what to eat in this bewildering world of conflicting advice, and you want to read only one book, I recommend this one.
Posted by Grandma Ann at 8:06 AM