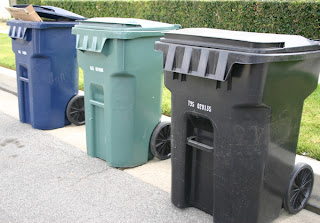 OK, let's talk trash. I mean real trash. Friday is trash pick-up day in my neighbor-hood. A few months ago I came home from a trip to Arizona to find two large and one humongous trash container sitting on my driveway. One is for trash-trash, one is for yard clippings, and one for recyclables. I had no warning that there was going to be a change in my service and apparently neither did any of my neighbors. These new containers are designed to be grabbed, raised, and emptied by machinery on the truck so that the humans do not have to do the heavy lifting anymore. That's fine with me but the containers are so big that I can't store them away in my garage as I used to do. They won't even fit through the side door! The large one is 30 inches wide by 36 inches deep, almost square. If I store them on the side of the house, my gardener who also comes on Friday cannot get by with his lawn mower. But the worst part is that Friday is also street sweeping day in my neighborhood. The containers, we were told, must be placed against the curb, two feet apart, in order for the machinery to be able to grab them easily. The street sweeper says he cannot come on any other day, and the trash people refuse to change their schedule also. So even though we have all these no-parking signs in the neighborhood for Friday Street Cleaning, the streets are lined with trash containers!

It would help if they collected the trash early in the morning, but they always leave one container sitting there until late in the day. Every Friday I do a little dance putting the containers out, moving the emptied ones off the street and onto the driveway until the street sweeper has gone by and gardener is finished, and then putting all of them on the side of the house at the end of the day.
On the plus side, thought I, they have purchased all new trucks that don't spew diesel fumes throughout the morning air, but these large monsters make the windows vibrate worse than an earthquake. It takes me two weeks to come even close to filling a container, but if I skip a week, they get so heavy they are difficult for me to handle. I am told that if I were over 70, I could request a smaller container for the regular trash. What if I am just 60 and have arthritis? But I did use the new system to get rid of a bucket of cement that we had put on the side of the house from when we had the patio redone. Under the old system, they wouldn't take it because it was too heavy. I watched with fascination (almost) as the truck grabbed the container, squeezed the heck out of it, lifted it up and over, and then slammed it back down. And the problem was gone.
My neighbors have been up-in-arms over this whole thing, or at least one of them has. He passed around a survey to get everyone's opinion on the matter and the Homeowners' Association is looking into it. We'll see what happens next.
Such is life in the big city.
Posted by Grandma Ann at 11:30 AM